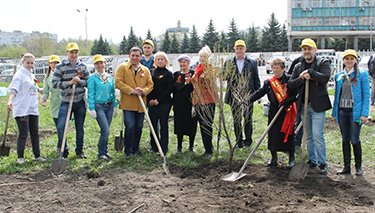 TopProm Holding made its contribution to beautifying of the city preparing to celebrate the Victory day.

On the 5th of May TopProm Holding participated in the annual planting campaign dedicated to the 72nd anniversary of the Great Victory..

The Holding employees headed by Vladimir Chestneyshin, the General Director, together with the city authorities representatives, veterans and war workers planted apple-trees, rowan trees, willows, bushes of broom and almond –40 pieces of trees and bushes in total.

The planting is the first stage of the project. Later it is planned to create flower beds, and after that – to build walk ways and to mount benches.